Over the last few years, the craft beer & whiskey industry in Ireland has gone from strength to strength, with approximately 14 microbreweries and numerous distilleries operating in Ireland today. Beer & Whiskey connoisseurs from across the country seek out brew pubs in favour of the mainstream bars. The process of brewing is age-old and greatly appreciated by fans as each brew is lovingly created through a hands-on, complex brewing process.

Arrive in Dublin and transfer to Malahide Castle for a traditional Irish breakfast in Avoca in the Courtyard to the side of the Castle, incorporating old stone-walled outhouses and attached to a new Interpretative Centre telling the story of the Castle itself, which dates from the 12th century. After breakfast we will visit Malahide Castle.
Highlights of the castle tour are the beautiful reception rooms, The Oak Room, The Small & Large Drawing Rooms and the Great Hall; home to the original Battle of the Boyne painting- on loan from the National Gallery of Ireland. The castle is adorned with beautiful period furniture and an extensive collection of paintings from the National Gallery of Ireland. The Castle also boasts beautiful parklands and a walled garden which can be visited.
We will cotinue to the Guinness Storehouse originally built in 1904 to house the Guinness fermentation process. The core of the Guinness Storehouse building is modeled on a giant pint glass, stretching up from reception on the ground floor to the Gravity Bar in the sky. If filled this giant pint would hold approximately 14.3 million pints of Guinness. At the Guinness Storehouse you’ll discover all there is to know about the world famous beer. On arrival the group will enjoy a light lunch before going on a tour of the building finishing in the gravity bar with its panoramic views of Dublin for a pint of Guinness.
After our visit we will continue to Galway.
This evening, enjoy a private reception at Busker Brownes with the Mayor of Galway City, Mr. Frank Fahy as the city prepares for the St. Patricks Day Parade. Frank can give a potted history of the Medieval City of the Tribes! Following the reception, you will enjoy an Irish Coffee demonstration from Rosin Sweeney, Powers Irish Coffee Making Champion 2011. She will give an Irish Coffee demonstration giving the history of Irish whiskey and showing you the art of Irish Coffee making. Enjoy dinner in a city centre restaurant.
Overnight at your Galway hotel – Bed and Breakfast basis.

Enjoy a walking tour of this historical city. This tour begins with a visit to Eyre Square and the Old Town Wall followed by a walk through the ancient medieval quarter to explore Galway’s hidden secrets and urban legends. West of the River Corrib we discover city landmarks such the Catholic Cathedral and Gothic University Quadrangle. Other tour highlights include Lynch’s Castle and memorial window along with St Nicholas Church and the Claddagh Village. We will enjoy some free time in this lovely city before we check into our hotel.
This evening enjoy dinner at Monroes Tavern in Galway city.
Overnight at your Galway hotel – Bed and Breakfast basis.

Day 3: Connemara & the West of Ireland

Depart your hotel and travel into the West of Ireland and the beautiful scenery of Connemara. We will drive out by Oughterard and continue towards Killary Harbour.
Experience what Oscar Wilde described as the “savage beauty” of Connemara, taking in Killary Harbour and Kylemore Abbey. Killary Harbour is a picturesque fjord, which forms a natural border between Galway and Mayo, in the heart of Connemara. Ringed by mountains, the fjord is often speckled with dolphins as they chase migrating salmon during spring and early summer.
We will continue to Kylemore Abbey, the only Irish home of the Benedictine Nuns. Built originally as a Castle (1868) it is one of the best examples of Irish neo-gothic architecture. The estate features include a Victorian Walled Garden, restored Abbey reception rooms, Gothic Church, tranquil walks, craft shop, pottery, and restaurant. We will return to Galway via Carraroe and the Independent Brewery.
Independent Brewing is based in Carraroe, in the heart of the Connemara Gaeltacht. Trading since January 2014, this craft brewery has already established itself as an artisan producer of award winning, local tasty beers. They also have the distinction of being the only craft brewery in the Connemara region. Enjoy a guided tour and tasting at the Independent Brewery. We will call in to a local pub in Carraroe and meet some of the locals.
Enjoy dinner in Eat Gastro Pub | Massimo’s in Galway city with a pig on a spit, and expert talk on Irish Food & Drink pairings from JP McMahon. Founding chair and director of the Galway Food Festival, JP is an ambassador for Irish food and a network leader for the global Cook it Raw project. He is also the ambassador for Spanish food in Ireland in particular promoting the wines of Rías Baixas (Galicia) and Jerez. JP is the Symposium Director for Food On the Edge www.foodontheedge.ie an International Conference for chefs & food industry professionals taking place in Galway in Oct 2015. Following dinner enjoy an evening of Irish entertainment with local musicians and traditional Irish dancers.
Overnight at your Galway hotel – Bed and Breakfast basis.

This morning we depart the City of the Tribes and travel to Dublin via Kilbeggan Distillery. The Kilbeggan Distillery is the oldest licenced distillery in Ireland. Dating back to 1757 a visit today lets you discover real artisanal Irish whiskey distilling at its finest. Start your tour in 1757 and discover how Irish whiskey was made in decades past. Discover the families that owned the distillery in the past and the importance the local community had on what you see today. You’ll see the old mash tuns and fermenters, still in their original positions. You can also get close to the iconic waterwheel which once powered the whole distillery and kept whiskey flowing through Kilbeggan. Of course no visit would be complete without a taste of Kilbeggan’s finest.

Continue to Dublin City and enjoy dinner at leisure in Temple Bar or in any of the city’s winding streets of culinary delights!
Overnight in Dublin hotel – Bed and Breakfast basis.

This morning enjoy Dublin city. Visit Trinity College where the Book of Kells is housed, and explore St. Patrick’s Cathedral.
Our day in Dublin starts with a city tour including a visit to Trinity College to see the magnificent Old Library and the 1200 year old Book of Kells, the beautifully illuminated version of the Gospels, designed by monks in the 9th century. We continue with a visit to St. Patrick’s Cathedral and then onto Teelings Distillery.
Teeling Distillery – Dublin has traditionally been the heart of the Irish whiskey industry. During Walter Teeling’s time there were over 37 different distilleries in Dublin. The Liberties area of Dublin in particular was recognised as the epicentre for Dublin whiskey and was dubbed the ‘Golden Triangle’ due to the number of distilleries clustered in a one mile radius. During the 19th century Dublin whiskey became globally recognised as the Premier whiskey in the world. Renowned for its “smooth” and unique “character” it sold at a premium to all other types of whiskey. As a result of this success some of the largest distilleries in the world emerged from these small craft Dublin distillers.
Since 1782 the Teeling Family has been crafting Irish whiskey and it all began with Walter. In 1782 Walter Teeling set up a craft distillery on Marrowbone Lane in the Liberties area of Dublin commencing a 230 year tradition of distilling for the Teeling family. From Walter Teeling to the latest generation of Teelings in Jack and Stephen who are carrying on the family’s legacy and forging a bright new future for distilling in Dublin and for Irish whiskey.
In the late afternoon transfer to Belfast for overnight.
Return to your hotel for overnight in Belfast – Bed and Breakfast basis.

This morning we depart our hotel and travel along the famous north Antrim coastline. We will visit the majestic Giants Causeway and travel to Bushmills Distillery.
We will enjoy a scenic drive to the Giant’s Causeway on the North Coast, one of the great natural wonders of Ireland and a UNESCO World Heritage Site.
Bushmills is more than whiskey – people feel it – there’s a spirit of independence, and adventure told through stories from the past. The Bushmills distillery has had its fair share of visitors these past few hundred years, now over 120,000 each year (and that’s not counting our resident ghost, The Grey Lady). And of all the living souls that are encountered, every one of them leaves with a smile on their face and a spring in their step, mind you, that might just be from the fumes as they hand craft their Bushmills. We will visit and experience it first hand and be transported into a world that hasn’t changed much since they first opened our doors way back.”
Return to Belfast city and enjoy dinner at leisure in Belfast’s thriving culinary scene. Optional visit to the Duke of York traditional Belfast bar, hidden down a cobbled Cathedral Quarter alley off Donegall Street crammed with original mirrors and memorabilia, enjoy cold beer and great Guinness. They claim to have the largest selection of Irish whiskeys in Ireland. You also can visit Kelly’s Cellars bar, built in 1720, it is one of the oldest pubs in Belfast

Return to your hotel for overnight in Belfast – Bed and Breakfast basis.

This morning enjoy a panoramic tour of Belfast city including sites of the Falls Road and the Peace Wall. You will have an option to have a free morning in Belfast or visit the  Titanic Centre at your own expense. Titanic Belfast is the world’s largest Titanic visitor experience.  It is located in Titanic Quarter, right beside the historic site of this world famous ship’s construction.  As you journey through the nine large galleries of this state-of-the-art interactive exhibition, you will uncover the true story of the Titanic, from her conception in Belfast in the early 1900s, through her construction and launch, to her famous maiden voyage and subsequent place in history.

After Belfast city, travel to the White Horse Inn where we will enjoy lunch and beer tasting.   The beers from the White Horse Brewery in Northern Ireland are hand-crafted in small batches and they strive to have full flavors for you to enjoy. Since the Whitewater Brewery was established in 1996 it has been steadily gaining recognition as one of the finest and fastest growing microbreweries in the UK and beyond.

After our visit we will continue to Dublin.

Overnight at your Dublin hotel – Bed and Breakfast basis. 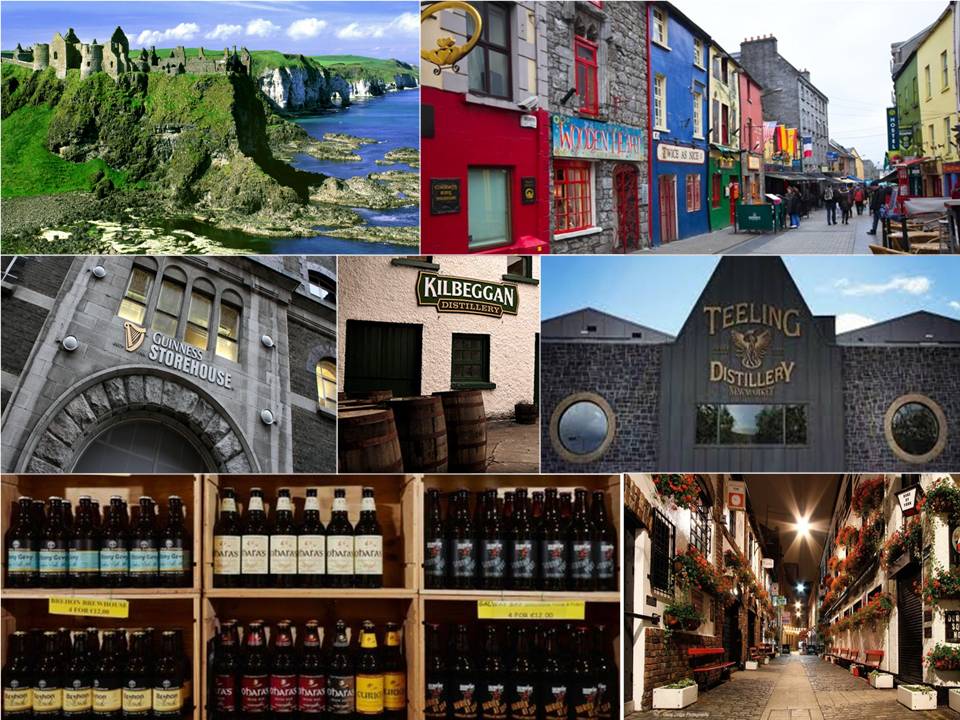